What Star is this? 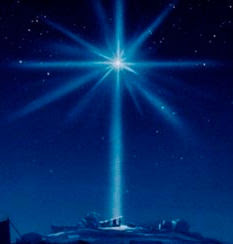 VOYAGE OF THE STAR SEEKERS

Across the desert plains they came,

By wise men gifts were Borne,

From distant eastern lands of Fame,

They journeyed on forlorn.

They sought for news at Herod's throne,

But no such word was heard -

Of king or priest it was not known -

The STAR stopped over Bethlehem,

A stable yard the Scene.

A manger held the precious One.

The cold, night air was keen.

The gifts of Frankincense and Myrrh

and Gold were offered then.

The stable yard was all Astir

With beasts, and Love and Men.

So strange in royal palace grand

No Christ child was revealed;

But then in Ramah's humble sand

The eastern kings had Kneeled.

The ages since are lost in Time,

But time no burdens cast

Upon the minds of all Mankind -

The STAR outshines the Past!