Fourth Sunday after The Epiphany Today is the Fourth Sunday after The Epiphany, or revealing of Christ to the Gentiles. As always, the collect is interesting and helpful, the Epistle makes the point that all power flows from God and God has ordained the civil government of our earthly existence. Yet that power sometimes runs towards evil. Indeed it does, but the wrath of God will be on those who mis-use His power. But, today I would like to talk about the Gospel. I want to talk about the leper. The Centurion lent his name to our church, but it is the leper we will talk about today. So go ahead and read:

The Fourth Sunday after The Epiphany.

GOD, who knowest us to be set in the midst of so many and great dangers, that by reason of the frailty of our nature we cannot always stand upright; Grant to us such strength and protection, as may support us in all dangers, and carry us through all temptations; through Jesus Christ our Lord. Amen.

The Epistle for today came from the Thirteenth Chapter of Paul’s letter to the Romans beginning at the First Verse:

ET every soul be subject unto the higher powers. For there is no power but of God: the powers that be are ordained of God. Whosoever therefore resisteth the power, resisteth the ordinance of God; and they that resist shall receive to themselves condemnation. For rulers are not a terror to good works, but to the evil. Wilt thou then not be afraid of the power? do that which is good, and thou shalt have praise of the same: for he is the minister of God to thee for good. But if thou do that which is evil, be afraid; for he beareth not the sword in vain: for he is the minister of God, a revenger to execute wrath upon him that doeth evil. Wherefore ye must needs be subject, not only for wrath, but also for conscience sake. For for this cause pay ye tribute also: for they are God’s ministers, attending continually upon this very thing. Render therefore to all their dues: tribute to whom tribute is due; custom to whom custom; fear to whom fear; honour to whom honour.

The Gospel for today came from the Eighth Chapter of the Gospel according to Saint Matthew, beginning at the First Verse.

HEN he was come down from the mountain, great multitudes followed him. And, behold, there came a leper and worshipped him, saying, Lord, if thou wilt, thou canst make me clean. And Jesus put forth his hand, and touched him, saying, I will; be thou clean. And immediately his leprosy was cleansed. And Jesus saith unto him, See thou tell no man; but go thy way, shew thyself to the priest, and offer the gift that Moses commanded, for a testimony unto them. And when Jesus was entered into Capernaum, there came unto him a centurion, beseeching him, and saying, Lord, my servant lieth at home sick of the palsy, grievously tormented. And Jesus saith unto him, I will come and heal him. The centurion answered and said, Lord, I am not worthy that thou shouldest come under my roof: but speak the word only, and my servant shall be healed. For I am a man under authority, having soldiers under me: and I say to this man, Go, and he goeth; and to another, Come, and he cometh; and to my servant, Do this, and he doeth it. When Jesus heard it, he marvelled, and said to them that followed, Verily I say unto you, I have not found so great faith, no, not in Israel. And I say unto you, that many shall come from the east and west, and shall sit down with Abraham, and Isaac, and Jacob, in the kingdom of heaven. But the children of the kingdom shall be cast out into outer darkness: there shall be weeping and gnashing of teeth. And Jesus said unto the centurion, Go thy way; and as thou hast believed, so be it done unto thee. And his servant was healed in the selfsame hour.

Think about this …There came a leper … Leprosy is one of those biblical diseases, not real, just a bad thing we don’t want to associate with. Or, is it? No, leprosy is real and has nothing to do with leopards. Leprosy is a chronic disease caused by the bacteria Mycobacterium leprae and Mycobacterium lepromatosis. It is primarily a granulomatous disease of the peripheral nerves and mucosa of the upper respiratory tract with skin lesions as the primary external sign. During biblical times, there was no treatment. As leprosy progressed, it permanently damaged skin, nerves, limbs and eyes. Body parts become numb, infected, infection results in tissue loss, so fingers and toes become shortened and deformed as cartilage is absorbed into the body. Leprosy is a terrifying, horrific, disfiguring and debilitating disease. On the other hand, about 95 percent of the population is actually immune to the disease, though no one knows who or why, though the immunity seems genetic. The disease seems to be spread by respiratory droplets, so the wearing of facial masks was actually helpful.

So dreaded was the disease that leprosy became synonymous with being an outcast, one beyond the pale. To the people of the time, it appeared the person was disintegrating from the extremities inward, rotting away in a form altogether hideous and awful. At the time, there was no treatment. Yet, like the centurion in the verses right after, the leper knew Jesus could heal him. He had faith.

So he asked. When he asked there was no bargaining, no – If you do this, I will do that. He asked Jesus’ help with no conditions. What he got was likewise freely given. Go thou clean. No one ever asked Jesus for help and was refused.

If leprosy is not the best description of our human condition, I don't know what is. Yet, His Cure never fails. 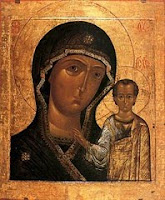 Mary is to be admired, for the role she undertook was no easy task. The way was certain to be fraught with sorrow. Yet, she did undertake to do the thing which God asked of her. Most mothers are faced with similar joys and sorrows. Yet do not underestimate her strength. She answered when God called.

It might be comforting to have someone lower than God to talk to; someone we don’t have to look so far up to. But, what does Jesus say? Don’t pray to me, pray to the Father in my name. If we are not to pray to Jesus, but rather to pray to God in his name, what does that say about praying to Mary, or Saint Bob for that matter?

The Prime Paradox of Christianity

The Collaborative International Dictionary of English defines the word PARADOX as:

Paradox - A tenet or proposition contrary to received opinion; an assertion or sentiment seemingly contradictory, or opposed to common sense; that which in appearance or terms is absurd, but yet may be true in fact.

WordNet is a lot simpler:

There is a paradox in Christianity. It is the prime paradox of our lives here on earth.

The Bible is very clear, we are saved by faith alone, no “good” thing we do brings us salvation, for we always make more mistakes than we make perfection. Nothing we do will bring us salvation. Our eternal life is given freely to us when we follow our Lord Jesus Christ. He asks nothing for the Single Perfect Sacrifice, made One Time, for All Mankind, for All Time. Nothing. The sacrifice would not be a sacrifice if it were not freely given.

We can do all the good we want, but if we believe not in our Lord, in the Gospel of Saint John, in the Sixth Verse of the Fourteenth Chapter He tells us, “I am the way, the truth, and the life: no man cometh unto the Father, but by me.”

Yet, if we “believe” and do not our best to act in accordance with His instructions, we do not believe, but merely claim to believe. In the Gospel of Saint Luke, Chapter Six, Verse Thirty-One we read Jesus’ words, “And as ye would that men should do to you, do ye also to them likewise.” In Verse 46, He says, “And why call ye me, Lord, Lord, and do not the things which I say?” Saint James counsels us to “visit the fatherless and widows in their affliction, [and] to keep ourselves unspotted from the world.” Actions.

Those good works which we have the ability to perform do not save us; but they are the manifestation of our faith. You will note the title of Saint Luke’s second book is The Acts of the Apostles, not the Thoughts or Prayers or Feelings of the Apostles. God looks to us for action. Thoughts, prayers and feelings are nice, they just won’t take the place of action. Action is the name of the game!