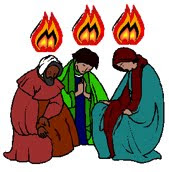 The Propers for today are found on Page 180-181, with the Collect first:

GOD, who as at this time didst teach the hearts of thy faithful people, by sending to them the light of thy Holy Spirit; Grant us by the same Spirit to have a right judgment in all things, and evermore to rejoice in his holy comfort; through the merits of Christ Jesus our Saviour, who liveth and reigneth with thee, in the unity of the same Spirit, one God, world without end. Amen.

¶ This Collect is to be said daily throughout Whitsun Week.

This morning’s Epistle, which written in the Second Chapter of the Acts of the Apostles beginning at the First Verse:

HEN the day of Pentecost was fully come, they were all with one accord in one place. And suddenly there came a sound from heaven as of a rushing mighty wind, and it filled all the house where they were sitting. And there appeared unto them cloven tongues like as of fire, and it sat upon each of them. And they were all filled with the Holy Ghost, and began to speak with other tongues, as the Spirit gave them utterance. And there were dwelling at Jerusalem Jews, devout men, out of every nation under heaven. Now when this was noised abroad, the multitude came together, and were confounded, because that every man heard them speak in his own language. And they were all amazed and marvelled, saying one to another, Behold, are not all these which speak Galilæans? And how hear we every man in our own tongue, wherein we were born? Parthians, and Medes, and Elamites, and the dwellers in Mesopotamia, and in Judæa, and Cappadocia, in Pontus, and Asia, Phrygia, and Pamphylia, in Egypt, and in the parts of Libya about Cyrene, and strangers of Rome, Jews and proselytes, Cretes and Arabians, we do hear them speak in our tongues the wonderful works of God.

Today’s Gospel was written in the Fourteenth Chapter of the Gospel according to Saint John beginning at the Fifteenth Verse:

ESUS said unto his disciples, If ye love me, keep my commandments. And I will pray the Father, and he shall give you another Comforter, that he may abide with you for ever; even the Spirit of truth; whom the world cannot receive, because it seeth him not, neither knoweth him: but ye know him; for he dwelleth with you, and shall be in you. I will not leave you comfortless: I will come to you. Yet a little while, and the world seeth me no more; but ye see me: because I live, ye shall live also. At that day ye shall know that I am in my Father, and ye in me, and I in you. He that hath my commandments, and keepeth them, he it is that loveth me: and he that loveth me shall be loved of my Father, and I will love him, and will manifest myself to him. Judas saith unto him, not Iscariot, Lord, how is it that thou wilt manifest thyself unto us, and not unto the world? Jesus answered and said unto him, If a man love me, he will keep my words; and my Father will love him, and we will come unto him, and make our abode with him. He that loveth me not keepeth not my sayings: and the word which ye hear is not mine, but the Father’s which sent me. These things have I spoken unto you, being yet present with you. But the Comforter, which is the Holy Ghost, whom the Father will send in my name, he shall teach you all things, and bring all things to your remembrance, whatsoever I have said unto you. Peace I leave with you, my peace I give unto you: not as the world giveth, give I unto you. Let not your heart be troubled, neither let it be afraid. Ye have heard how I said unto you, I go away, and come again unto you. If ye loved me, ye would rejoice, because I said, I go unto the Father: for my Father is greater than I. And now I have told you before it come to pass, that, when it is come to pass, ye might believe. Hereafter I will not talk much with you: for the prince of this world cometh, and hath nothing in me. But that the world may know that I love the Father; and as the Father gave me commandment, even so I do.

We worship the One True God, a triune God, that is Three in One; Father, Son and Holy Ghost. Most people have no trouble understanding the concept of God the Father, Christians seem to get God the Son, but many seem to have a bit of difficulty with the Holy Ghost.

The Holy Ghost has been there since the beginning, He breathed life into the world, yet His actions seemed to be sporadic until Pentecost.

Well, today is Pentecost, the time one normally thinks of the Holy Ghost, the Holy Spirit, the Breath of God, the Comforter. When people do think of Him, they oft think of the actions described in the Epistle. The dancing and speaking in tongues. All that happened so we might understand that with the help of the Holy Ghost we might bring the Word to all mankind. The Word of God is a universal language. When the disciples spoke in tongues, the people around them heard the Word in their own language, not an odd combination of sounds that no one understood. The disciples spoke and were heard by those around them in their own language, not Klingon. It is not for us to speak in tongues without study; that was a one shot deal. It was designed to show us that we could, with hard work and persistence bring the Gospel to the world in the language of the people.

In today’s Gospel, Jesus tells us that He would be leaving, but the Father would send a facilitator; one who whose presence, if we let Him into our hearts, would let us understand His Word with those self same hearts. The Comforter would bring the Love of God into our hearts to let us feel His Love. He will help us understand that we are striving to be one with God, with Jesus and with the Holy Ghost. Our love can be demonstrated by our actions. For if we love Jesus, we will do as He asked.

If you think about it, you will recall that the second half of the Book of Luke is titled The Acts of the Apostles. It is not the thoughts, the beliefs, the feelings, the meditations, the inner feelings or any other touchy feely, it is the ACTS. If you believe, act on those beliefs.