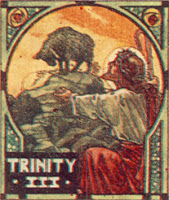 The Propers for today are found on Page 192-193, with the Collect first:

LORD, we beseech thee mercifully to hear us; and grant that we, to whom thou hast given an hearty desire to pray, may, by thy mighty aid, be defended and comforted in all dangers and adversities; through Jesus Christ our Lord. Amen.

Ryan Hopkins read the Epistle, which came from the Fifth Chapter of St. Peter‘s First Epistle, beginning at the Fifth Verse. Peter tells us to not be proud of what we have been given, rather to use those gifts to the benefit of those around us. We should ask God to carry our concerns and worries so that we might to the tasks set before us.

We must pay attention to the world around us and take care not to fall prey to the devil, for he is constantly looking for ways to help us drift off our path towards heaven. You must understand that other Christians come from the same pool you do, humanity, they have the same frailties and problems you do. Hang in there and do your very best, God will take care of you in the end. There are none so poor as cannot purchase a noble death. Never forget that.

Trust in God and dread naught.

LL of you be subject one to another, and be clothed with humility: for God resisteth the proud, and giveth grace to the humble. Humble yourselves therefore under the mighty hand of God, that he may exalt you in due time: casting all your care upon him; for he careth for you. Be sober, be vigilant; because your adversary the devil, as a roaring lion, walketh about, seeking whom he may devour: whom resist stedfast in the faith, knowing that the same afflictions are accomplished in your brethren that are in the world. But the God of all grace, who hath called us unto his eternal glory by Christ Jesus, after that ye have suffered a while, make you perfect, stablish, strengthen, settle you. To him be glory and dominion for ever and ever. Amen.

Today’s Gospel started in the Fifteenth Chapter of the Gospel according to St. Luke, beginning at the First Verse. This is a story of Jesus, rather than one of his stories. The Pharisees were appalled that those who were particularly sinners in their very qualified eyes were attracted to Jesus and even worse, he talked to them, even breaking bread with them. To the Pharisees, Jesus told the story of the shepherd who loses a sheep and searches for it. When he finds it he carries it back to the flock on his shoulders. He goes on to tell the story of the woman who loses a piece of silver and turns her house inside out to find it. That story ends in a very interesting word play in English, “Rejoice with me; for I have found the piece (peace) which I had lost.” Jesus ends the story with, “there is joy in the presence of the angels of God over one sinner that repenteth.” Having said that, there is also joy when we do not sin, but choose God’s way. And we enjoy it more also.

HEN drew near unto him all the publicans and sinners for to hear him. And the Pharisees and scribes murmured, saying, This man receiveth sinners, and eateth with them. And he spake this parable unto them saying, What man of you, having an hundred sheep, if he lose one of them, doth not leave the ninety and nine in the wilderness, and go after that which is lost, until he find it? And when he hath found it, he layeth it on his shoulders, rejoicing. And when he cometh home, he calleth together his friends and neighbours, saying unto them, Rejoice with me; for I have found my sheep which was lost. I say unto you, that likewise joy shall be in heaven over one sinner that repenteth, more than over ninety and nine just persons, which need no repentance. Either what woman having ten pieces of silver, if she lose one piece, doth not light a candle, and sweep the house, and seek diligently till she find it? And when she hath found it, she calleth her friends and her neighbours together, saying, Rejoice with me; for I have found the piece which I had lost. Likewise, I say unto you, there is joy in the presence of the angels of God over one sinner that repenteth.

Today’s sermon discussed both the Epistle and Gospel directly after them. The content is in the summaries above.