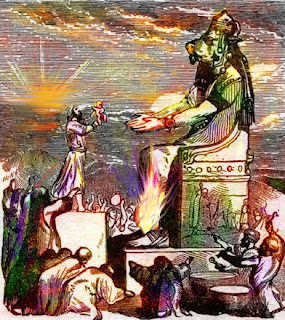 Worshipping Baal meant sacrificing human life, never your own, just the innocent newly born, so that you might have prosperity here on earth.  Now that “medical professionals have perfected killing the unborn and partly born, there is a new way to prosperity and convenience.  Will you kill your baby so that you can have the payments for a new BMW instead of just buying an old Ford?

Do you wonder what morals Barack Obama had in mind teaching his “miracle daughters” when he said, "I am going to teach them first of all about values and morals. But if they make a mistake, I don’t want them punished with a baby."

Baal had his babies roasted alive.  Secular Humanism prefers to suck their brains out while they are alive or maybe just dismember them.  All so that young people are not punished with a baby.

Two thousand years ago, Jesus said, “But whoso shall offend one of these little ones which believe in me, it were better for him that a millstone were hanged about his neck, and that he were drowned in the depth of the sea.” Matthew 18:6 KJV   Do you think sucking their brains out or dismembering them alive is offensive to these little ones?

Punished with a baby?  There is a special place in hell, perhaps with a millstone.
Posted by Hap at 8:20 PM