This story would make a fine movie, except it does not fit the mould of the current mood of Hollywood or the powers that be in our country.  It is a story of real me in real situations with a real outcome.  It demonstrates the very finest of America.

Consider if you will the intertwined stories of Thomas J. Hudner and Jesse Leroy Brown whose lives came together before God and parted on 4 December 1950. 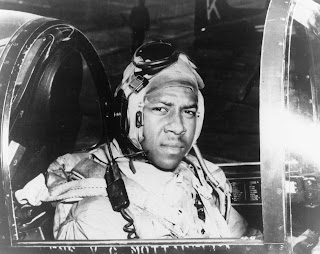 Ensign Jesse LeRoy Brown was born in Hattiesburg, Mississippi, on 13 October 1926. Jesse did not know the Navy had no black pilots and never intended to have any.  He was told that, but he paid no attention.  Too young to fight in World War II, he enlisted in the Naval Reserve in 1946 and was appointed a Midshipman, USN, the following year. After attending Navy pre-flight school and flight training, he was designated a Naval Aviator in October 1948, the very first black person[1] to achieve this status. The Naval Reserve pilot system was different than today, like Neil Armstrong, he was a flying Midshipman.  Then Midshipman Brown was assigned to Fighter Squadron 32. He received his commission as Ensign in April 1949. During the Korean War, his squadron operated from CV32 USS Leyte, flying F4U-4 Corsair fighters in support of United Nations forces.

On 4 December 1950, while on a close air support mission near the Chosin Reservoir, flying his 20th mission as the element lead, Jesse’s Corsair was hit by ground fire over hostile territory and lost power. The only place to land was on the side of a mountain covered by snow. LTJG Thomas Hudner, two years older than Jesse, a Naval Academy graduate and his wingman watched in horror as Jesse’s plane pancaked hard on the mountainside.

Hudner was briefly buoyed by hope to see Jesse wave from the open canopy. But he wasn’t making any effort to get out of the cockpit. Something was very wrong, and to make matters worse, there was smoke rising from the shattered plane. Hudner made a quick decision to try to rescue Jesse. That meant crash landing his plane next to Jesse on the side of the mountain, which he successfully did.  Can you imagine what it takes to put a six ton machine down onto the side of a mountain at 85 miles per hour?

Meanwhile, the rest of the squadron circled overhead to watch for Chinese soldiers and radioed for a rescue helicopter.

Hudner found Jesse trapped in the buckled cockpit without his helmet and gloves in below zero temperature and undetermined internal injuries. He covered Jesse’s head with a wool cap and his numb hands with a scarf and used the snow to put out the smoldering fire. But he couldn’t budge Jesse no matter how hard he tried.  He returned to his crashed aircraft and radioed other airborne planes, requesting that the helicopter bring an ax and fire extinguisher. Charlie Ward, a pilot friend of Jesse’s, arrived, making a difficult landing with the helicopter. Charlie had an axe, but that didn’t help free Jesse since the axe just bounced off the metal surface of the plane. Jesse kept getting weaker as the two men desperately tried to free him.  Their efforts were for naught and Jesse slipped slowly away as they worked in frustration. His last words were to his wife, "Tell Daisy that I love her. "

Back on the ship, Jesse’s squadron debated what to do. They didn’t want to leave him for the Chinese so they decided to give Jesse a "warriors funeral. " The next day seven aircraft left the carrier and flew over the crash site. While one plane accelerated in a vertical climb toward heaven, the others dove and released their bombs on the mountainside. The voice of one of the pilots could be heard over the radio reciting the Lord’s Prayer.

On 13 April 1951, President Truman awarded the Medal of Honor to Jesse’s friend and wingman, Thomas Hudner.  Jesse was posthumously awarded the Distinguished Flying Cross, the Air Medal and the Purple Heart.

Think of this, down below he could see his fellow Naval Aviator trapped in the cockpit, with enemy forces likely to close soon.  With no thought for himself, thinking only of his fellow Aviator (notice not black or African, but just a fellow Aviator), Tom Hudner did the only thing he could to help. Charlie Ward came in to pick up his fellow Aviators; not black, not white.

This is the America the Reverend Doctor Martin Luther King dreamed of.   It had taken root far before the “I have a dream” speech and with actions, not mere words.  It is an America with Americans, plain and simple.  God’s chosen people showed their face once again at the Chosin Reservoir in this story as in so many others from that terrible place.


[1] Jesse was an American, not an “African American.”  He had dark skin, but was red, white and blue, through and through.
Posted by Hap at 4:04 PM