Sermon - Rev Hap Arnold
Church of the Faithful Centurion - Descanso, California
Today’s sermon is the message of Christmas.  “He came unto His own and they received Him not.” Christ came unto His own, the people he created, to show them the Word which He is the living embodiment of, the Living and True Scripture. They received Neither the written Word that his Apostles wrote, nor the spoken Word from His Mouth that He spake unto them. “But as many as received Him, to them he gave the power to become the sons of God.” He has adopted us unto his family, through His Word, which he has spoken unto us, that we may fulfill it and live in harmony with others in this word. 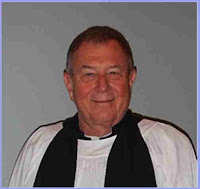 “And the Word was made flesh and dwelt among us.” This speaks to the living incarnate nature of the Word, (Christ) who dwelt among us 2,000 years ago, that He might understand our nature more, so that He could teach us with more understanding. If He lived in our conditions, it would be easier for Him to relate to us when He taught and spake the Word of His Father.   “And we beheld His glory, the glory as of the only begotten of the Father, full of grace and truth.” In That Word, He spake both full of grace and of truth as John talked about in the last Gospel. Through His grace and truth that we accept, only can we do things for His Glory. Without the Word, we cannot do anything for Him, as imperfect creatures, now having been accounted and spoken for by Christ. With the Word, we are empowered to do things for Him. The birth of Christ would foreshadow his death, which would bring about the ultimate freedom, that from sin and death.

That is such an important point. 16 For God so loved the world, that he gave his only begotten Son, that whosoever believeth in him should not perish, but have everlasting life. (John 3:16)  Not just that God, the Almighty Creator of Heaven and Earth, would send His only begotten Son, but that the Son came knowing not only that He, King of Kings, would be born in a manger, live a life of relative poverty, but that He would die a horrible horrible death that we might have eternal life.  He came to this miserable planet for us, to give us life eternal!  He knew when He came here precisely how He would leave, yet He came anyway.  Think of that on this Christmas Day!

Today we recall the birth of our Lord and Savior, the only means by which we, imperfect creatures with free will, might be accounted as perfect before God when our day of judgment comes.  Born, not in a palace, but in a stable, He is all that we have been promised.  Taking the substance of Man, all Man and all God, He knows our temptations, He knows our failures, He knows our failings, He knows our sorrow; He also knows our happiness, our small triumphs, our hopes and our dreams.  He is the only one in this world who will never fail us in the slightest.  He gives us His example to follow.  If we will but follow Him, we will draw closer to God.  He made the world, He knows the world.  He defeated the Prince of this World, thus with His Help, so will we.  This is a day of joy, foreshadowing a day of sorrow, leading to the greatest joy of all.

Let us joyfully receive Him into our hearts and homes, that we might do what He asks and spread the Joy of His Arrival on Earth that we might prepare for His Second Coming. If we do this and what he asks, which is a common theme that stays the same throughout the Christian Year, we shall be Blessed with good things, as a result of doing what He asks. On the Christmas Day, let us Rejoice in His Coming and begin our preparations for His Second Coming

Let this be a blessed and happy Christmas.  He has come to us!