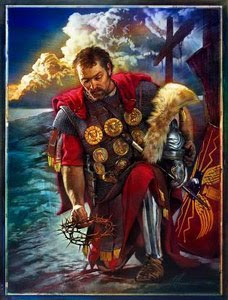 Sermon – Reverend Jack Arnold - Time and Action
Church of the Faithful Centurion, Descanso, California
Today’s sermon brought the Collect, Epistle and Gospel together and is partly contained in the forewords above. 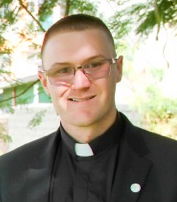 In the Collect, we acknowledge that God knows the dangers, toils and snares with which we must contend, which so often keep us from the upright acknowledgement and defense of that which is true and correct.  With these infirmities, our only hope is that certain hope of His help to support us, not to get out of the problems, but to make our way through them to His Glory.

Paul points out in his epistle that as we are all here on Earth, earthly rulers are subject to God and His Rules and they ultimately need to defer to Him for their authority, not look to themselves for that authority. Their authority derives from God not from man.  He points out that whosoever rejects the powers or the knowledge that the powers they are given come from God are rejecting/resisting God himself. In this day in age that is become more and more common in the leadership of countries nationwide. We can even see it in the Governors of California and New York who are actively trying to get legislation passed that is in effect rejecting God and His Principles.

Of course, to paraphrase Solomon, this is nothing new. Man has always sought to supplant God as the ultimate authority on earth. This is the whole basis behind both communism and National Socialism. There are slight differences between both mainly the means of production, but the end result is very similar in both.  They both seek to supplant God and His Authority here on earth, and make the State a non-God based church on earth, where instead of worshiping God, they worship man, basically worshipping Satan instead.

Paul says if we are doing good then we need not be afraid of the power from God that is on loan to the rulers who are ministers of God in a way. The only people who need be afraid of them are evildoers, who the ruler is appointed to use the sword to bring before God for justice. However, if the rulers that be are not punishing evil doers put people who are good doers, then we know they are not worthy of the power that God has bestowed upon them. Again, this is becoming more and more apparent across the globe. We are not in the business of condemning people’s souls to one eternal destination or the other, that is God’s job. But, Paul points out that we can arrange for the meeting to happen, when people violate God’s most sovereign laws.

Paul goes on to say that through the authority invested by them in God, people need to pay the rulers tribute, to which it is due, the customs to custom, fear to fear, honor to honor. It goes very much hand in hand with what Jesus said on the subject “Render unto Caesar’s which is Caesar’s, and unto God what is God’s.” There is respect which ought to be paid to the rightful people who are the representatives of God ruling the people. That respect ends however, when those representatives reject God’s authority and are no longer worthy of the respect.

This also goes back to the honor thy father and thy mother concept. As long as they are doing their best to raise you up in a Christian way and showing by example to follow Christ to get to heaven, then they are worthy of that honor. But if they are doing the opposite, then they are not worthy of the honor.  It is still worth behaving in a Christian manner to both unfaithful rulers and parents, but realize they become unworthy of that honor when they reject God and His Authority.

Christianity is not a solitary religion, one all about the individual, though it certainly depends on individuals as part of the Team lead by Christ to carry it out.  God has given each of us varying talents and varying capabilities.  We must each of us do that for the Church that which we do better than others and respect those who we work with.  No power comes from God, rather special responsibilities, leaders who lead with His Will in mind must be accorded the respect they are due by virtue of their position.  They must also lead with His Will in mind, for a leader following the ways of this world and the Prince of Darkness is not worthy of respect or followership.  We must put faith in those to whom faith is due.

Faith and action, is what Christianity is all about. Christ’s actions upon the cross the solid base that our faith is based upon. His death and resurrection is the key principle behind Christianity. Actions are a crucial element of our faith. Christ’s faith accounts us as perfect before God because of His Actions. The centurion of this week’s Gospel is a symbol of faith and what appears to be inaction is his action.  He is also the person for whom our parish draws its name.  The centurion was the basic leader symbol of the Roman Empire.  A group of eight to ten soldiers was led by a Contubern.  Ten Contubernium formed a Centuria, which was led by a Centurion.  Six to ten of these formed a Cohort, also led by a Centurion.  He was an important man, able to reward or punish at will.  He knew power and how to wield it.

There was no question in his mind, the Centurion knew Jesus. His action was the seeming inaction of acknowledging his unworthiness and telling Jesus, “I am not worthy that thou shouldest come under my roof: but speak the word only, and my servant shall be healed.”

That easy to find, easy to follow, easy to hike path does not lead to the summit where eternal life in the real world awaits. Open your heart to the Holy Ghost, use His Power to follow our Lord to God who awaits in heaven.