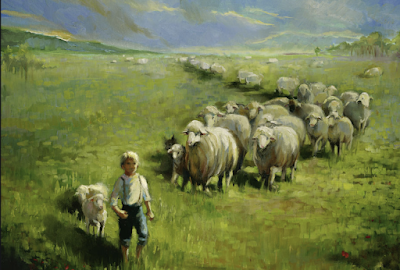 The First Sunday after The Epiphany.

LORD, we beseech thee mercifully to receive the prayers of thy people who call upon thee; and grant that they may both perceive and know what things they ought to do, and also may have grace and power faithfully to fulfil the same; through Jesus Christ our Lord. Amen.

The Epiphany, or the Manifestation of Christ

GOD, who by the leading of a star didst manifest thy only-begotten Son to the Gentiles; Mercifully grant that we, who know thee now by faith, may after this life have the fruition of thy glorious Godhead; through the same thy Son Jesus Christ our Lord. Amen.

¶ This Collect is to be said daily throughout the Octave

OE unto the world because of offences! for it must needs be that offences come; but woe to that man by whom the offence cometh! 8 Wherefore if thy hand or thy foot offend thee, cut them off, and cast them from thee: it is better for thee to enter into life halt or maimed, rather than having two hands or two feet to be cast into everlasting fire. 9 And if thine eye offend thee, pluck it out, and cast it from thee: it is better for thee to enter into life with one eye, rather than having two eyes to be cast into hell fire. 10 Take heed that ye despise not one of these little ones; for I say unto you, That in heaven their angels do always behold the face of my Father which is in heaven. 11 For the Son of man is come to save that which was lost. 12 How think ye? if a man have an hundred sheep, and one of them be gone astray, doth he not leave the ninety and nine, and goeth into the mountains, and seeketh that which is gone astray? 13 And if so be that he find it, verily I say unto you, he rejoiceth more of that sheep, than of the ninety and nine which went not astray. 14 Even so it is not the will of your Father which is in heaven, that one of these little ones should perish. (Matthew 18:1-14)

Who, indeed, is the greatest in the Kingdom of Heaven? What motivates the question? Is it a covetous and proud spirit?

Man wants to always have a prominent position.  Little children could care less about the position – they simply desire the company of someone who loves them and whom they love.

Jesus shows the conditions for the entrance of the Kingdom by example:

Jesus here sets an excellent example for us: He does not use the old approach of parents – "Because I said so!" He sets an example of a little child. Let a little child teach them…..Isaiah 11:6 The wolf also shall dwell with the lamb, and the leopard shall lie down with the kid; and the calf and the young lion and the fatling together; and a little child shall lead them.

Jesus called a little child unto Him, and set him in the midst of them,

Notice that the little child does not recoil from the arms of Jesus. The child, though not having known Christ for more than a short few minutes, trust this heart of His implicitly.

This is the manner and state of the Kingdom of Heaven – it is like the innocent heart of a little child and, yet, there are those in it who wish to be first in the Kingdom.

Those who wish to be first will always persecute those of less stature. They will forbid, as much as possible, others from coming near to Christ. This is demonstrated also in Mark:

ND they brought young children to him, that he should touch them: and his disciples rebuked those that brought them. 10:14 But when Jesus saw it, he was much displeased, and said unto them, Suffer the little children to come unto me, and forbid them not: for of such is the kingdom of God. 10:15 Verily I say unto you, Whosoever shall not receive the kingdom of God as a little child, he shall not enter therein. 10:16 And he took them up in his arms, put his hands upon them, and blessed them.

He shows the conditions of entrance into and eminence in His kingdom by a living example.

There were always children at hand round Him, when He wanted them.

Their quick instinct for pure and loving souls drew them to Him, and this little one was not afraid to be taken by the hand, and to be afterward caught up in His arms, and pressed to His heart.

The discussion of the disciples made a certain presumption that was not entirely correct. They presumed that each present would be in the Kingdom of Heaven. We know this was not true for at least one among them – namely, Judas Iscariot.

Greatest in the kingdom? Make sure that you go in at all, first; which you will never do, so long as you keep your present ambitious minds.'

What a child is naturally, and without effort or merit, by reason of age and position, we must become, if we are to pass the narrow portal which admits into the Kingdom of Heaven. For broad is the way, that leadeth to destruction, and many there be they go in thereat.

Before becoming the star of the team, be certain that you first make the team!

The child is, by its very position, lowly and modest, and makes no claims, and lives by instinctive confidence, and does not care about honors, and has these qualities which in us are virtues, and is not puffed up by possessing them.

That is the ideal which is realized more generally in the child than analogous ideals are immature manhood. Such simplicity, modesty, humility, must be ours.

We must be made small ere we can enter that door.

And as is the requirement for entrance, so is it for eminence. The child does not humble himself, but is humble by nature, but we must humble ourselves if we would be great.

After answering the question of preeminence in the Kingdom, Christ goes on to express our duties and responsibilities for little ones:

ND whoso shall receive one such little child in My name receiveth Me. 6. But whoso shall offend one of these little ones which believe in Me, it were better for him that a millstone were hanged about his neck, and that he were drowned in the depth of the sea.

The subject, then, of these verses is the blessedness of recognizing and welcoming Christlike lowly believers, and the fatal effect of the opposite conduct.

To 'receive one such little child in My name' is just to have a sympathetic appreciation of, and to be ready to welcome to heart and home, those who are lowly in their own and in the world's estimate, but princes of Christ's court and kingdom.

"In my Name" 'In My name' is equivalent to 'for the sake of My revealed character,' and refers both to the receiver and to the received. The blessedness of such reception, so far as the receiver is concerned, is not merely that he thereby comes into happy relations with Christ's foremost servants, but that he gets Christ Himself into his heart

When a person is an agent for a company, he acts in the name of the company and in the best interests and purposes of the company. When we act in the Name of Christ, we act in every way as much as if it were our Lord Himself giving the directions.

Christ summarizes the honor and dignity of His 'little ones.'

VEN so it is not the will of your Father which is in heaven, that one of these little ones should perish.

If God wills a thing, it will surely come to pass. Even the smallest and weakest among us, devoted to Christ, will not perish but have everlasting life.