LT Rabbi Roland B. Gittelsohn's Eulogy ChC, USNR
5th Marine Division Cemetery, Iwo Jima March 1945
Roland B. Gittelsohn, Rabbi and Marine Chaplain on Iwo Jima passed away on 13  December 1995   He was a scholar on religious and governmental issues who was a Marine Corps chaplain during the battle of Iwo Jima, died Wednesday at Beth Israel Hospital in Boston. He was 85. 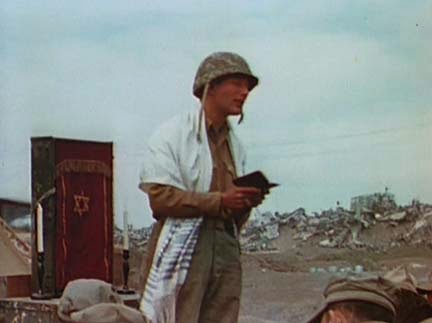 Gittelsohn was assigned to the Fifth Marine Division, was the first Jewish chaplain the Marine Corps ever appointed. The American invading force at Iwo Jima included approximately 1,500 Jewish Marines, and Rabbi Gittelsohn was in the thick of the fray, ministering to Marines of all faiths in the combat zone. He shared the fear, horror and despair of the fighting men, each of whom knew that each day might be his last. Roland Gittelsohn's tireless efforts to comfort the wounded and encourage the fearful won him three service ribbons.  He was awarded three combat ribbons for his service with the Fifth Marine Division on Iwo Jima. His sermon at the dedication of the division's cemetery, titled "The Purest Democracy," attracted wide attention and was read by many radio and television announcers during and after the war.

Division Chaplain Warren Cuthriell, a Protestant minister, asked Rabbi Gittelsohn to deliver the memorial sermon at a combined religious service dedicating the Marine Cemetery. Cuthriell wanted all the fallen Marines (black and white, Protestant, Catholic and Jewish) honored in a single, nondenominational ceremony. Instead, three separate religious services were held. At the Jewish service, to a congregation of 70 or so who attended, Rabbi Gittelsohn delivered the powerful eulogy he originally wrote for the combined service.   Among Gittelsohn's listeners were three Protestant chaplains so who felt compelled to the service. One of them borrowed the manuscript and, unknown to Gittelsohn, circulated several thousand copies to his regiment. Some Marines enclosed the copies in letters to their families. An avalanche of coverage resulted. Time magazine published excerpts, which wire services spread even further. The entire sermon was inserted into the Congressional Record, the Army released the eulogy for short-wave broadcast to American troops throughout the world and radio commentator Robert St. John read it on his program and on many succeeding Memorial Days.

In February 1995, Rabbi Gittelsohn gave the benediction at the Iwo Jima Memorial in Arlington, Va., at a ceremony marking the 50th anniversary of the landing.  Following is the benediction and dedication he gave on Iwo Jima in March 1945.

LT Rabbi Gittelsohn spoke
This is perhaps the grimmest, and surely the holiest task we have faced since D-Day. Here before us lie the bodies of comrades and friends. Men who until yesterday or last week laughed with us, joked with us, trained with us. Men who were on the same ships with us, and went over the sides with us as we prepared to hit the beaches of this island. Men who fought with us and feared with us. Somewhere in this plot of ground there may lie the man who could have discovered the cure for cancer. Under one of these Christian crosses, or beneath a Jewish Star of David, there may now rest a man who was destined to be a great prophet–to find the way, perhaps, for all to live in plenty, with poverty and hardship for none. Now they lie here silently in this sacred soil, and we gather to consecrate this earth in their memory.

It is not easy to do so. Some of us have buried our closest friends here. We saw these men killed before our very eyes. Any one of us might have died in their places. Indeed, some of us are alive and breathing at this very moment only because men who lie here beneath us had the courage and strength to give their lives for ours. To speak in memory of such men as these is not easy. Of them too can it be said with utter truth: "The world will little note, nor long remember what we say here. It can never forget what they did here."

No, our poor power of speech can add nothing to what these men and the other dead of our Division who are not here have already done. All that we even hope to do is follow their example. To show the same selfless courage in peace that they did in war. To swear that by the grace of God and the stubborn strength and power of human will, their sons and ours shall never suffer these pains again. These men have done their jobs well. They have paid the ghastly price of freedom. If that freedom be once again lost, as it was after the last war, the unforgivable blame will be ours, not theirs. So it is we the living who are here to be dedicated and consecrated.

We dedicate ourselves, first, to live together in peace the way they fought and are buried in this war. Here lie men who loved America because their ancestors generations ago helped in her founding, and other men who loved her with equal passion because they themselves or their own fathers escaped from oppression to her blessed shores. Here lie officers and men, negroes and whites, rich men and poor–together. Here no man prefers another because of his faith or despises him because of his color. Here there are no quotas of how many from each group are admitted or allowed. Among these men there is no discrimination. No prejudices. No hatred. Theirs is the highest and purest democracy.

Any man among us the living who fails to understand that will thereby betray those who lie here dead. Whoever of us lifts up his hand in hate against a brother, or thinks himself superior to those who happen to be in the minority, makes of this ceremony and of the bloody sacrifice it commemorates, an empty, hollow mockery. To this, then, as our solemn, sacred duty, do we the living now dedicate ourselves: to the rights of Protestants, Catholics and Jews, of white men and negroes alike, to enjoy the democracy for which all of them here have paid the price.

To one thing more do we consecrate ourselves in memory of those who sleep beneath these crosses and stars. We shall not foolishly suppose, as did the last generation of America's fghting men, that victory on the battlefield will automatically guarantee the triumph of democracy at home. This war, with all its frightful heartache and suffering,is but the beginning our our generation's struggle for democracy. When the last battle has been won, there will be those at home, as there were the last time, who will want us to turn our backs in selfish isolation on the rest of organized humanity, and thus to sabotage the very peace for which we fight. We promise you who lie here: we will not do that! We will join hands with Britain, China, Russia in peace, even as we have in war, to build the kind of world for which you died.

When the last shot has been fired, there will still be those whose eyes are turned backward, not forward, who will be satisfied with those wide extremes of poverty and wealth in which the seeds of another war can breed. We promise you, our departed comrades: this too we will not permit. This war has been fought by the common man; its fruits of peace must be enjoyed by the common man! We promise, by all that is sacred and holy, that your sons, the sons of moners and millers, the sons of farmers and workers, the right to a living that is decent and secure.

When the final cross has been placed in the last cemetery, once again there will be those to whom profit is more important than peace, who will insist with the voice of sweet reasonableness and appeasement that it is better to trade with the enemies of mankind, than by crushing them, to lose their profit. To you who sleep here silently, we give our promise: we will not listen! We will not forget that some of you were burnt with oil that came from American wells, that many of you were killed with shells fashioned from American steel. We promise that when once again men profit at your expense, we shall remember how you looked when we placed you reverently, lovingly, in the ground.

Thus do we memorialize those who, having ceased living with us, now live within us. Thus do we consecrate ourselves the living to carry on the struggle they began. Too much blood has gone into this soil for us to let it lie barren. Too much pain and heartache have fertilized the earth on which we stand. We here solemnly swear: this shall not be in vain! Out of this, and from the suffering and sorrow of those who mourn this, will come–we promise–the birth of a new freedom for the sons of men everywhere.       Amen.
Posted by Hap at 6:02 PM