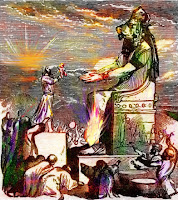 Planned Parenthood[1] is in the news, but is it new information or practice?

Moloch, Molech, Molekh, or Molek, representing Hebrew מלך mlk, (translated directly into king) is either the name of a god and the name of a particular kind of sacrifice associated historically with that god in cultures throughout the Middle East, including but not limited to the Jewish, Egyptian, Caananite, Phoenician and related cultures in North Africa and the Levant.

Moloch went by many names including, but not limited to, Ba'al, Moloch, Apis Bull, Golden Calf, Chemosh, as well as many other names, and was widely worshipped in the Middle East and wherever Punic culture extended (including, but not limited to, the Ammonites, Edomites and the Moabites). Baal Moloch was conceived under the form of a calf or an ox or depicted as a man with the head of a bull.

Hadad, Baal or simply the King identified the god within his cult. The name Moloch is the name he was known by among his worshippers, but is a Hebrew translation. (MLK has been found on stele at the infant necropolis in Carthage.) The written form Μολώχ Moloch (in the Septuagint Greek translation of the Old Testament), or Molech (Hebrew), is the word Melech or king, transformed by interposing the vowels of bosheth or 'shameful thing'.

Worshipping Baal meant sacrificing human life, never your own, just the innocent newly born, so you might have prosperity here on earth.

Now that “medical professionals have perfected killing the unborn and partly born, there is a new way to prosperity and convenience.

Will you kill your baby so that you can have the payments for a new BMW instead of just driving the old Ford?

Do you wonder what morals Barack Obama had in mind teaching his “miracle daughters”?  He said, "I am going to teach them first of all about values and morals. But if they make a mistake, I don’t want them punished with a baby."

Baal had his babies roasted alive.  Secular Humanism prefers to suck their brains out while they are alive or maybe just dismember them.  All so young people are not punished with a baby.

When a woman gives up her child, now prior to birth not post birth, for the reasons of "economics" or "ability" to raise him, that child, once aborted, is in the end burnt or rather incinerated. The burnt offering to Baal-Moloch is still created and created under the exact same hopes as it has been done for centuries: the hope for a rich and easy life.

The rich and easy life is just that, easy life, but life itself is rather short. One cannot give praise for the day to come, when one can not be sure to live to see its sun rise. As such, we, as societies, continue this evil practice of sacrifice to Moloch to gain prosperity; albeit in a more sanitized version of abortion, to buy our way out of "costly" children, a gift given directly from God. In so doing we damn our souls and the souls of future generations who will grow up and be perverted by the societies thus made.

Two thousand years ago, Jesus said, But whoso shall offend one of these little ones which believe in me, it were better for him that a millstone were hanged about his neck, and that he were drowned in the depth of the sea. (Matthew 18:6)  Do you think sucking their brains out or dismembering them alive is offensive to these little ones?

Punished with a baby?  There is a special place in hell, perhaps with a millstone.


[1] An interesting name for an organization dedicated to avoiding parenthood by the elimination of children.
Posted by Hap at 1:36 PM