What is the “Liturgical Year”? 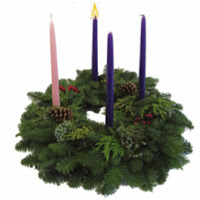 Liturgy based Christian churches who consider themselves catholic, or universal, use a Christian Calendar which has a pre-set annual cycle of liturgical seasons which determines when Feasts, Memorials, Commemorations, and Solemnities are to be observed and which portions of Scripture are to be read.

Distinct liturgical colors are used in connection with different seasons of the liturgical year. The dates of the festivals vary somewhat between the Western (Roman Catholic, Anglican, Lutheran, and Protestant) churches and the Eastern Orthodox Churches, though the sequence and logic is the same.

The dates of many feasts vary from year to year (Moveable Feasts) due to the variation in the date of Easter, and all other dates follow from that. The extent to which the fasts and festivals are celebrated also varies between churches; in general Protestant churches observe far fewer of them than Catholic and Orthodox churches, and in particular are less likely to celebrate feasts of the Virgin Mary and the Saints.

The liturgical cycle divides the year into a series of seasons, each with their own mood, theological emphases, and modes of prayer, which can be signified by different ways of decorating churches, vestments for clergy, scriptural readings, themes for preaching and even different traditions and practices often observed personally or in the home.

In churches that follow the liturgical year, the scripture passages for each Sunday (and even each day of the year in the Anglican tradition) are specified by a list called a lectionary.  Anglicans and Lutherans have traditionally followed the lectionary since the days of the Protestant Reformation.  Since the 1960s, the adoption and use of lectionaries in other Protestant churches (Methodist, Reformed, United, etc.) increased. This has led to a greater awareness of the Christian year among Protestants in the later decades of the 20th century, especially among mainline denominations.

Western Christian liturgical calendars are based on the cycle of the Roman or Latin Rite of the Catholic Church, including Lutheran, Anglican, and Protestant calendars since this cycle pre-dates the Reformation.

Generally, the liturgical seasons in western Christianity are:

Advent From the Latin adventus, "arrival" or "coming", the first season of the liturgical year begins four Sundays before Christmas and ends on Christmas Eve. Historically observed as a "fast", its purpose focuses on preparation for the coming Christ.

Although often conceived as awaiting the coming of the Christ-child at Christmas it also points towards the final coming of Christ.

This period is marked by the Advent Wreath, a garland of evergreens with four candles. Traditionally, the wreath is made of four candles in a circle of evergreens. Three candles are violet and the fourth is rose. The rose candle is lit on the third Sunday of Advent.  Although the main symbolism of the advent wreath is simply marking the progression of time, the church attaches themes to each candle, most often 'hope', 'faith', 'joy', and 'love'. Color: Violet or Blue. On the third Sunday of Advent, also called Gaudete Sunday, Rose/Pink is used.

Historically, the primary sanctuary color of Advent is Purple. This is the color of penitence and fasting as well as the color of royalty to welcome the Advent of the King. Purple is still used in Catholic churches. The purple of Advent is also the color of suffering used during Lent and Holy Week. This points to an important connection between Jesus’ birth and death. The nativity, the Incarnation, cannot be separated from the crucifixion. The purpose of Jesus’ coming into the world, of the "Word made flesh" and dwelling among us, is to reveal God and His grace to the world through Jesus’ life and teaching, but also through his suffering, death, and resurrection.

To reflect this emphasis, originally Advent was a time of penitence and fasting, much as the Season of Lent and so shared the color of Lent. In the four weeks of Advent the third Sunday came to be a time of rejoicing that the fasting was almost over (in some traditions it is called Gaudete Sunday, from the Latin word for "rejoice").   The shift from the purple of the Season to pink or rose for the third Sunday Advent candles reflected this lessening emphasis on penitence as attention turned more to celebration of the season.   Churches other than Anglican have changed colors and emphasis on the whole wreath, we remain true to tradition.  Maybe we are just slow learners or not so open to change for change’ sake.

The word Advent means "coming" or "arrival. " The focus of the entire season is the celebration of the birth of Jesus the Christ in his First Advent, and the anticipation of the return of Christ the King in his Second Advent. Thus, Advent is far more than simply marking a 2,000 year old event in history. It is celebrating a truth about God, the revelation of God in Christ whereby all of creation might be reconciled to God. That is a process in which we now participate, and the consummation of which we anticipate. Scripture reading for Advent will reflect this emphasis on the Second Advent, including themes of accountability for faithfulness at His coming, judgment on sin, and the hope of eternal life. In this double focus on past and future, Advent also symbolizes the spiritual journey of individuals and a congregation, as they affirm that Christ has come, that He is present in the world today, and that He will come again in power. That acknowledgment provides a basis for Kingdom ethics, for holy living arising from a profound sense that we live "between the times" and are called to be faithful stewards of what is entrusted to us as God’s people. So, as the church celebrates God’s entry into history in the Incarnation, and anticipates a future consummation to that history for which "all creation is groaning awaiting its redemption", it also confesses its own responsibility as a people commissioned to "love the Lord your God with all your heart" and to "love your neighbor as yourself. "
Posted by Hap at 7:06 AM