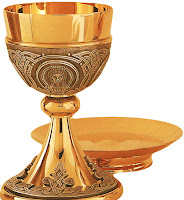 The issue of how often to hold Holy Communion is an interesting one. You will often find those in the ministerial role who desire to be addressed as Father calling for Holy Communion any time they can gather two or three together. They insist the only real service is Holy Communion, to which they oft refer to as Mass.

If you look back in history, you find the early reformed church through the late 1800s often had Morning or Evening Prayer as the primary service, with Holy Communion once or twice a month. That could have been because that was how often a minister was available or it could be a recognition of the value of each service.

When I pray the Lord’s Prayer, I try to read it rather than say it. I do so because it helps me concentrate on the meaning, rather than the saying. If I cannot read it, I say it concentrating on the very meaning to avoid making it another incantation.

It has been my personal experience that congregations who alternate services, Morning / Evening Prayer one week, Holy Communion the next, or once a month, if you like, get more out of the services than those who only have Holy Communion.

I believe strongly that we are here to spread The Word and minister to our congregations’ needs. It is not about my needs, but those of the congregation. That meets God’s needs, thus mine.

Of course, I am the guy in the black polo shirt.