The Prodigal Son and Lesson you may not have learned 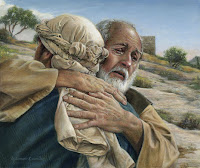 First, the Fifteenth Chapter of the Gospel according to Saint Luke beginning at the Tenth Verse:

10 Likewise, I say unto you, there is joy in the presence of the angels of God over one sinner that repenteth.

12 And the younger of them said to his father, Father, give me the portion of goods that falleth to me. And he divided unto them his living.

13 And not many days after the younger son gathered all together, and took his journey into a far country, and there wasted his substance with riotous living.

14 And when he had spent all, there arose a mighty famine in that land; and he began to be in want.

15 And he went and joined himself to a citizen of that country; and he sent him into his fields to feed swine.

16 And he would fain have filled his belly with the husks that the swine did eat: and no man gave unto him.

17 And when he came to himself, he said, How many hired servants of my father's have bread enough and to spare, and I perish with hunger!

18 I will arise and go to my father, and will say unto him, Father, I have sinned against heaven, and before thee,

19 And am no more worthy to be called thy son: make me as one of thy hired servants.

20 And he arose, and came to his father. But when he was yet a great way off, his father saw him, and had compassion, and ran, and fell on his neck, and kissed him.

21 And the son said unto him, Father, I have sinned against heaven, and in thy sight, and am no more worthy to be called thy son.

22 But the father said to his servants, Bring forth the best robe, and put it on him; and put a ring on his hand, and shoes on his feet:

23 And bring hither the fatted calf, and kill it; and let us eat, and be merry:

24 For this my son was dead, and is alive again; he was lost, and is found. And they began to be merry.

25 Now his elder son was in the field: and as he came and drew nigh to the house, he heard musick and dancing.

26 And he called one of the servants, and asked what these things meant.

27 And he said unto him, Thy brother is come; and thy father hath killed the fatted calf, because he hath received him safe and sound.

28 And he was angry, and would not go in: therefore came his father out, and intreated him.

29 And he answering said to his father, Lo, these many years do I serve thee, neither transgressed I at any time thy commandment: and yet thou never gavest me a kid, that I might make merry with my friends:

30 But as soon as this thy son was come, which hath devoured thy living with harlots, thou hast killed for him the fatted calf.

31 And he said unto him, Son, thou art ever with me, and all that I have is thine.

32 It was meet that we should make merry, and be glad: for this thy brother was dead, and is alive again; and was lost, and is found.

The Prodigal Son and Lesson you may not have learned

When we read the story of the Prodigal Son, it seems we almost always concentrate on the lesson to be learned from the son’s return home. That lesson is pretty clear; God is there for us, all we have to do is repent and return. He is there with open arms, He always has been and He always will be. He does not scold on seeing us coming from afar, but holds His arms out in joyous greeting. When He welcomes us back, we are complete and full members of His family, as if we never left. We return to our status as full heirs of His Kingdom.

But, there is another lesson, oft missed, that of the older son. We easily see ourselves as the younger son, climbing back from the brink of the pit to the Father’s welcome arms.

What of the older son? The older son who has kept his father’s strict rules; worked hard; sweat and bled for his family. He is understandably upset when he finds his younger formerly dissolute brother has returned and been welcomed with open arms and a seemingly wide open pocket book, when he himself had not been given even a kid to throw a party with! One can see his vision of yet another portion of his family’s inheritance going down the drain. As Yogi Berra once said, “Its like Déjà vu all over again!” His feelings are understandable; yet are they the feelings of Christ? Should he not, too, be joyous in his brother’s return? The answer we know is a simple yes.

We miss this because it is too close to our own hearts. We see those who have not followed Christ trying to repent and somehow in our hearts we worry, like those workers in the vineyard, they will get the same deal we got. We are not being shortchanged by God because He is gracious to them. He is gracious to all. As Paul pointed out, “All fall short.” All includes each of us. Each, not some, not most or even almost all. Each of us!

So, back to the older brother. The older brother has a problem. Not only is he hurt because his father loves his brother (a dissolute sloth) as much as he loves him (who he perceives as good, though in reality every bit the rogue), he will now be sharing the family’s wealth with the returning brother.

Let us open our hearts to all of God’s family. Be joyous, not begrudging of those whose return from that “far country.”

O BE joyful in the Lord, all ye lands: * serve the Lord with gladness, and come before his presence with a song.

Be ye sure that the Lord he is God; it is he that hath made us, and not we ourselves; * we are his people, and the sheep of his pasture.

O go your way into his gates with thanksgiving, and into his courts with praise; * be thankful unto him, and speak good of his Name.

For the Lord is gracious, his mercy is everlasting; * and his truth endureth from generation to generation.

Be particularly joyful that all who come to Him get the same deal, no matter when.