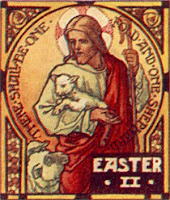 The Propers for today are found on Page 171-172, with the Collect first:

The Second Sunday after Easter.

LMIGHTY God, who hast given thine only Son to be unto us both a sacrifice for sin, and also an ensample of godly life; Give us grace that we may always most thankfully receive that his inestimable benefit, and also daily endeavour ourselves to follow the blessed steps of his most holy life; through the same thy Son Jesus Christ our Lord. Amen.

This morning’s Epistle came from the First Epistle of St. Peter, beginning at the Nineteenth Verse of the Second Chapter. The Epistle reminds us that Christ, who was completely without sin or guile, not only died for our sins, but suffered humiliation and torture without complaint for us. Thus, if we, because we believe in God and our Lord Jesus, are subjected to unfavorable comment, criticism or even persecution, we should bear this gladly, as our Lord gave us his example. We are as sheep going astray who have been returned to the flock by our Lord, the Shepherd and Bishop of our souls.

We were asked the question, who is this man Jesus? We answered, he is the Son of God; are we following him? In this Epistle again, we are admonished to follow our Lord.

HIS is thankworthy, if a man for conscience toward God endure grief, suffering wrongfully. For what glory is it, if, when ye be buffeted for your faults, ye shall take it patiently? but if, when ye do well, and suffer for it, ye take it patiently, this is acceptable with God. For even hereunto were ye called: because Christ also suffered for us, leaving us an example, that ye should follow his steps: who did no sin, neither was guile found in his mouth: who, when he was reviled, reviled not again; when he suffered, he threatened not; but committed himself to him that judgeth righteously: who his own self bare our sins in his own body on the tree, that we, being dead to sins, should live unto righteousness: by whose stripes ye were healed. For ye were as sheep going astray; but are now returned unto the Shepherd and Bishop of your souls.

Today’s Gospel started in the Tenth chapter of the Gospel according to St. John beginning at the Eleventh Verse. Using the words that give this Sunday its name, Jesus said: “I am the good shepherd; the good shepherd giveth his life for the sheep.” He goes on to say He is not a hireling who cares not for the flock, but rather the shepherd himself. He understands his job and puts it first, before his desires. Jesus knows each of His sheep and they know Him, even as He knows His Father and His Father knows Him. Because we are His sheep, He willingly laid down His life that we might live. Jesus also points out He is not here to shepherd only the Jews, but all men, “And there are other sheep I have, which are not of this fold: them also I must bring, and they shall hear my voice; and there shall be one flock, and one shepherd.”