The First Sunday after Easter 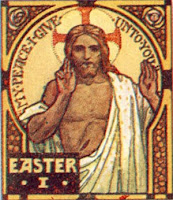 The Propers for today are found on Page 170-171, with the Collect first:

The First Sunday after Easter.

LMIGHTY Father, who hast given thine only Son to die for our sins, and to rise again for our justification; Grant us so to put away the leaven of malice and wickedness, that we may always serve thee in pureness of living and truth; through the merits of the same thy Son Jesus Christ our Lord. Amen.

The Epistle came from the First General Epistle of Saint John, beginning at the Fourth Verse of the Fifth Chapter:

hatsoever is born of God overcometh the world: and this is the victory that overcometh the world, even our faith. Who is he that overcometh the world, but he that believeth that Jesus is the Son of God? This is he that came by water and blood, even Jesus Christ; not by water only, but by water and blood. And it is the Spirit that beareth witness, because the Spirit is truth. For there are three that bear witness, the Spirit, and the water, and the blood: and these three agree in one. If we receive the witness of men, the witness of God is greater: for this is the witness of God which he hath testified of his Son. He that believeth on the Son of God hath the witness in himself: he that believeth not God hath made him a liar; because he believeth not the record that God gave of his Son. And this is the record, that God hath given to us eternal life, and this life is in his Son. He that hath the Son hath life; and he that hath not the Son of God hath not life.

The Gospel for this Sunday came from the Twentieth Chapter of the Gospel of Saint John beginning at the Nineteenth verse:

he same day at evening, being the first day of the week, when the doors were shut where the disciples were assembled for fear of the Jews, came Jesus and stood in the midst, and saith unto them, Peace be unto you. And when he had so said, he shewed unto them his hands and his side. Then were the disciples glad when they saw the Lord. Then said Jesus to them again, Peace be unto you: as my Father hath sent me, even so send I you. And when he had said this, he breathed on them, and saith unto them, Receive ye the Holy Ghost: whosesoever sins ye remit, they are remitted unto them; and whosesoever sins ye retain, they are retained.