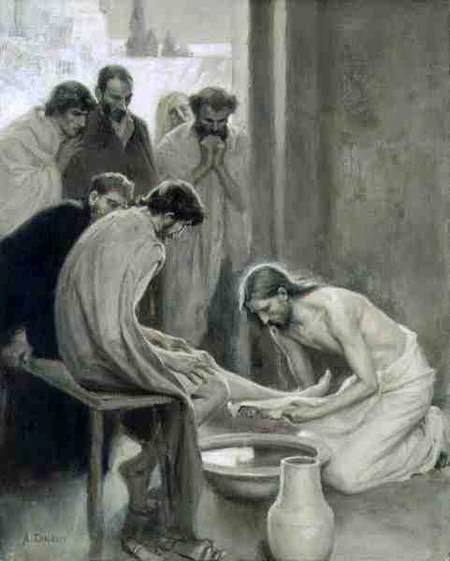 At the Passover Feast, Jesus and his disciples share the “Last Supper” and He washes their feet. Jesus blesses his bread and wine as his flesh and blood and shares it with his disciples, the institution of the Sacrament of Holy Communion. As Paul tells us in his First Letter to the Corinthians, “…the Lord Jesus the same night in which he was betrayed took bread: and when he had given thanks, he brake it, and said, Take, eat: this is my body, which is broken for you: this do in remembrance of me. After the same manner also he took the cup, when he had supped, saying, This cup is the new testament in my blood: this do ye, as oft as ye drink it, in remembrance of me. For as often as ye eat this bread, and drink this cup, ye do shew the Lord’s death till he come.”

At this same dinner, the disciples manage to quarrel over who should be the boss of who.  Jesus tells them he came in the role of a servant, as He is their master, their role is likewise that of servants.  In a move designed to reveal both His knowledge aforehand and our frailty, He tells Peter that Peter will deny Him thrice fore the cock croweth, or dawn breaks.  Peter, a loyal follower, denies what will be shown as clear fact.  Remember the further you let yourself get from the Lord, the weaker you are.  Weakness grows with the cube of the distance.  Stay close.

As the dinner goes on, Jesus tells them one of them will betray Him.  Not able to grasp that any of them would literally betray Him, each asks, “Is it I?”  Judas knows.

Jesus tells the disciples things are heating up, counsels them to arm themselves and goes out to pray in the garden of Gethsemane.  Disciples come with Him, despite their best efforts, they fall asleep.  Night has long fallen, the end of the day is near by our reckoning.  The end is near for Jesus here on earth.  Even nearer for Judas.