The Fourth Sunday in Lent 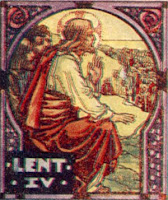 The Propers for today are found on Page 130-132, with the Collect first:

The Fourth Sunday in Lent.

RANT, we beseech thee, Almighty God, that we, who for our evil deeds do worthily deserve to be punished, by the comfort of thy grace may mercifully be relieved; through our Lord and Saviour Jesus Christ. Amen.

LMIGHTY and everlasting God, who hatest nothing that thou hast made, and dost forgive the sins of all those who are penitent; Create and make in us new and contrite hearts, that we, worthily lamenting our sins and acknowledging our wretchedness, may obtain of thee, the God of all mercy, perfect remission and forgiveness; through Jesus Christ our Lord. Amen.

¶ This Collect is to be said every day in Lent, after the Collect appointed for the day, until Palm Sunday.

The Epistle for today came from the Fourth Chapter of Paul’s letter to the Galatians beginning at the Twenty-First Verse.

Jesus talks about the two sons of Abraham, one of the bond, one of the free. These two, the bond under The Law and the free under The New Covenant. The people of old are the people of The Law, 613 laws by which they must abide. Perhaps more properly said in practice that they must work around or evade those 613. Yet, they cannot comply with all the laws nor even work around them. They are doomed to failure with no help from God. As people of The New Covenant, the original and real New Deal, we have only to comply with two laws or rules; To love the Lord with all our hearts and to love our neighbor. Actually, those two are much harder to fully comply with than avoiding the 613 laws of The Law. But, we have the key – Jesus Christ. He came to earth not only to lead us to heaven, from the front; but to be a propitiation for our sins, to make us account as perfect to God to allow us to come into His Land.

ELL me, ye that desire to be under the law, do ye not hear the law? For it is written, that Abraham had two sons, the one by a bondmaid, the other by a freewoman. But he who was of the bondwoman was born after the flesh; but he of the freewoman was by promise. Which things are an allegory: for these are the two covenants; the one from the mount Sinai, which gendereth to bondage, which is Agar. For this Agar is mount Sinai in Arabia, and answereth to Jerusalem which now is, and is in bondage with her children. But Jerusalem which is above is free, which is the mother of us all. For it is written, Rejoice, thou barren that bearest not: break forth and cry, thou that travailest not: for the desolate hath many more children than she which hath an husband. Now we, brethren, as Isaac was, are the children of promise. But as then he that was born after the flesh persecuted him that was born after the Spirit, even so it is now. Nevertheless what saith the scripture? Cast out the bondwoman and her son: for the son of the bondwoman shall not be heir with the son of the freewoman. So then, brethren, we are not children of the bondwoman, but of the free.

The Gospel for this morning came from the Sixth Chapter of the Gospel of St. John beginning at the First Verse.

ESUS went over the sea of Galilee, which is the sea of Tiberias. And a great multitude followed him, because they saw his miracles which he did on them that were diseased. And Jesus went up into a mountain, and there he sat with his disciples. And the passover, a feast of the Jews, was nigh. When Jesus then lifted up his eyes, and saw a great company come unto him, he saith unto Philip, Whence shall we buy bread, that these may eat? And this he said to prove him: for he himself knew what he would do. Philip answered him, Two hundred pennyworth of bread is not sufficient for them, that every one of them may take a little. One of his disciples, Andrew, Simon Peter’s brother, saith unto him, There is a lad here, which hath five barley loaves, and two small fishes: but what are they among so many? And Jesus said, Make the men sit down. Now there was much grass in the place. So the men sat down, in number about five thousand. And Jesus took the loaves; and when he had given thanks, he distributed to the disciples, and the disciples to them that were set down; and likewise of the fishes as much as they would. When they were filled, he said unto his disciples, Gather up the fragments that remain, that nothing be lost. Therefore they gathered them together, and filled twelve baskets with the fragments of the five barley loaves, which remained over and above unto them that had eaten. Then those men, when they had seen the miracle that Jesus did, said, This is of a truth that prophet that should come into the world.