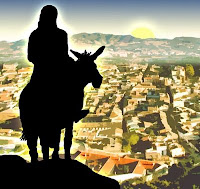 The name Palm Sunday comes from the palm leaves, along with clothing and other honors strewn along Jesus’ path as He came in to Jerusalem the first day of the week before His crucifixion. Of interest, only Jesus knew of the upcoming crucifixion, every one else, including Jews, Romans and the Christians, thought he was making a triumphant entrance in to the city. Those who thought of Him as Lord looked for a Kingdom of this World to be established. Far from that, He came to take us from this world to freedom.

The thing is, there is a tremendous amount that goes on between Palm Sunday and Easter Sunday, not all of it joyous, in fact not most of it. The beginning of the week was wonderful in the end of the week was even more wonderful, in between was a series of ups and downs the ups a little high and the downs very very deep. It is important to remember as you go through Holy Week that Jesus was in control of all the events of the week.

The first day of the week, Jesus came to Jerusalem as you read in the section above on Palm Sunday. On Sunday was a day of triumph and build anticipation for the Jews a day they had waited for four centuries.

The moon was almost full, this was the year of the Messiah according to Daniel. Jesus chose the route into the city, through the King’s Gate. The people saw Him coming and met him at the Mount of Olives. They expected Him to come in and proclaim His rule. And that He did, but not in the way the people were looking for.

On Monday, Jesus preaches in the Temple and further distanced Himself from the people’s vision and demonstrated God’s vision. He went in to the temple and through out the vendors selling “sacrificial” birds and animals at exorbitant cost, as well as the moneychangers, changing Roman money for Temple money dishonestly. Far from announcing Himself head of the temple, He announced they had made His Father’s house a den of thieves. Rather than working within the Jewish establishment, He over turned it!

Jesus and the Pharisees dispute in the Temple. He left for the garden of Gethsemane on the Mount of Olives. There he delivers the “Mount of Olives Discourse”. Judas agrees to betray him to the Jewish priests for 30 pieces of silver.

Judas spies on Jesus in the garden of Gethsemane.

At the Passover Feast, Jesus and his disciples share the “Last Supper” and He washes their feet. Jesus blesses his bread and wine as his flesh and blood and shares it with his disciples, the institution of the Sacrament of Holy Communion. He informs them that one of them will betray him. They go back to the garden of Gethsemane.

In the early hours before sunup, Jesus is betrayed by the “Judas Kiss” and arrested. At sunrise, he is disowned by Peter thrice before the cock croweth. When brought before Caiaphas, the Jewish High Priest, and his Council, he is condemned. He says that he will rise from death after three days.

They hand him over to the Roman authority, Pontius Pilate, who sends him to Herod (Antipas, the son of Herod the Great). Then Pilate asks the crowd who he is to pardon: a murderer, or Jesus? The crowd chooses Barabas and Jesus is sentenced to death.

Jesus is brought to Calvary, where on the “third hour” (9 am) he is crucified. He is mocked as he hangs between the Bad Thief and the Good Thief, whom he blesses. On the “sixth hour” (noon), darkness covers the land. Jesus cries out “My God, My God, hast Thou forsaken Me? ”

After drinking wine, he commits his spirit to his Father and dies. Matthew reports an earthquake that destroys the Temple. Many understand now that Jesus was the Son of God. His body is taken down and anointed. He is buried in a cave. This is the first day of death.

The Jewish Council remembers his vow to return and has the tomb guarded and sealed with a heavy stone. His followers stay in the “Easter Vigil”. Second day of death.

On the third day of death, Mary Magdalene and the other Mary find the tomb empty, but for an angel who tells them Jesus is already resurrected and is on His way to Galilee. On their way to tell the others, Jesus appears to them.

Think about the Week that was!

The reason Jesus came to Jerusalem at the Passover was to take the place of the yearly sacrifice by one perfect sacrifice, one time, for all time and for all mankind. His was the blood marking our door that the destroyer might pass over. The week started on a triumphant note and ended up trying to do between there were windows into the future, glimpses of the past, moments of despair, moments of terror, moments of confusion; but in the end joy.